This week we are looking at words that end in -or, -er, -ar. They all make the same sound at the end but need different endings. Have a look at your spelling list below and have a look at them on Spelling Shed.

This week we are going to have a look at writing diaries. There are many famous diaries that have been published the most famous is probably that of Anne Frank.

During these strange times you might have started to keep a diary and use it to record your thoughts and feelings.

Diaries tend to be much less formal as most of the time the only person it is for is yourself, it contains lots of information on how people feel and what they like and don't about the events of the day.

We are first going to have a look at a diary written by a 11 year old girl 81 years ago. Can you read the diary and then have a go at the questions attached?

Keeping with our maths focus this week, looking at multiplying fractions and mixed numbers today. We are going to be using the BBC Bitesize website today to have a look give us some help. Use the link below to watch the videos. There are two for you to watch, thinking about the method we use.

Once you have watched the videos there are two worksheets below for you to have a go at. Remember improper fractions should be turned into mixed numbers. The denominator (bottom number) tells you how many parts in a whole so 13/5 would mean that there are 2 lots of 5 in 12 and 3 left over so it would turn to 2 wholes and 3/5.

How did the kingdom end?

By the 1860s Benin was no longer a powerful empire and the Obas struggled to rule their people.

Benin was also under threat from Britain. The British wanted to gain control of Benin so they could get rich by selling its palm oil and rubber. The Oba tried to stop all contact with Britain, but the British insisted on their right to trade.

In 1897 a group of British officials tried to visit Benin. They were sent away because the Oba was busy with a religious ceremony, but they decided to visit anyway. As they approached the borders of Benin, a group of warriors drove them back and several British men were killed.

This attack made the British furious. They sent over a thousand soldiers to invade Benin. Benin City was burnt to the ground and the kingdom of Benin became part of the British Empire.

The British Empire was huge at this point. Our relatively small country took over many areas of the world. This is what it had control of in 1900. 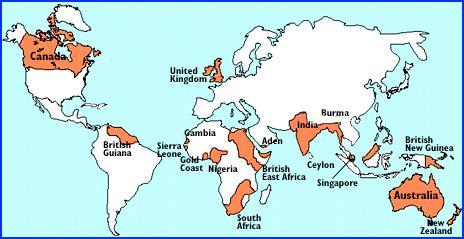 Can you write a small diary entry from the point of view of one of the Benin people. Last week we heard it was not always easy for the people of Benin being ruled by the Oba but do you think it was better or worse for them under the British Empire. Do a bit of research on what it was like to live under them and see if it was a better existence for the average person in Benin.

Remember to follow our e-safety rules, check to make sure the website is trustworthy and always tell an adult if you find something you know isn't appropriate.

Unfortunately not the ones with chocolate chips.

Some cookies are necessary in order to make this website function correctly. These are set by default and whilst you can block or delete them by changing your browser settings, some functionality such as being able to log in to the website will not work if you do this. The necessary cookies set on this website are as follows:

Cookies that are not necessary to make the website work, but which enable additional functionality, can also be set. By default these cookies are disabled, but you can choose to enable them below: